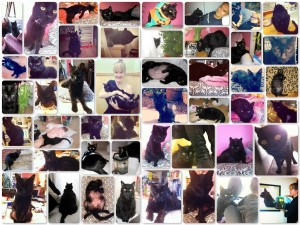 it was october of 1998 and i was sipping chai after a meditation class when a fellow participant mentioned that she had alley kittens free to a good home. a light bulb went off. i was fresh out of a most dysfunctional relationship and realized the only thing i missed about it was touch. a kitty could easily fix that! we exchanged numbers and i showed up at her home with only love. yep, no cat carrier. didn’t even have a litter box or kitty food yet. i was a novice.

i got to choose between a tiny white kitty that seemed, well, normal or a feisty black kitty who, frankly, didn’t. the black kitty it was. i took him to the nearest store to pick up supplies with him stuffed into a brown box with air holes {supplied by the woman whose alley he’d been consummated in}. i immediately knew he was special as he shoved his head through the holes, at times getting stuck.

we developed a beautiful bond that included mid-day messages to him left on my answering machine, a pink floral collar and leash to “walk” him around the ‘hood {most emasculating}, and his first rush to the emergency vet the following month for eating something he really shouldn’t have.

after getting neutered i asked if i could come visit him in the hospital. apparently the vet thought that was odd. then called for back-up when he was too ornery for one person to manage.

he chased people into closets, got riled up if he thought i was being harmed, and would sometimes slap at or bite your calf through the shower curtain when wanting attention. bonnard was a staple in the early days of tranquil space in my living room. pulling people’s hair with his teeth while they were in savasana, getting onto their mats and not moving, and standing in the center of the room during parties, often hissing.

years went on and bonnard continued to be alpha, require more vet visits for various health issues, and become quite obese. he was literally OCD about food. when the vet informed me that he was the equivalent of a 400-lb man, i was horrified. however, not having food out 24/7 meant bonnard would paw at books near my head and pull them off one by one until i woke up and put more food in the bowl. he was not a fan of an empty bowl. i often found food from kitchen cabinets stashed under my bed or in secret hiding places. yes, he’d open kitchen cabinets with his paws and pull food to safety.

at one point in 2005 he became blind and partially paralyzed, was failing fast, and was rushed to a kitty neurologist. after a cat scan, a few grand, and some steroids, he made a miraculous recovery. baffled the vets.

my 33rd birthday was spent visiting bonnard in the hospital after having two rubber bands extracted from his belly {happy birthday to me-see pic in middle with naked belly}. when we picked him up, he crawled onto beau’s lap and pooped while he drove us all home. no respect. oh, and this was not new behavior. he peed on an old beau’s lap while driving in 2000. he had a thing for sharing his feelings in not-so-subtle ways.

despite his lack of love for others, he had a thing for me. when my gramma died and i would spend days in bed crying, he would come to comfort me while louis the pug preferred snoring at the foot of the bed. he slowly grew to tolerate beau and maybe even like him a bit. when pulling together photos for this collage, i came across many of bonnard snuggling up to tim and tim looking scared. when we first began dating, bonnard was on the back of the couch and when tim turned around, he popped him in the forehead. not yet a fan. feisty, yet fabulous.

he mellowed in his older years and continued to have numerous health scares such as the random irritation on his leg that, when healed, grew back with white hair on his all-black frame. his ongoing battle with crystals in his bladder that required a special prescription diet from a young age. his occasional need for an electrolyte-filled IV just because. a dose of it and he’d perk right back up. and then there was his bout of psychogenic alopecia where he over-groomed his belly leaving him half-naked {note lower left pic}. oh, and his ongoing need for medication that we doused in spray cheese for happy consumption.

the decline began october 2012 when he was diagnosed with a hyperthyroid. we planned to go through the radioactive treatment that had a huge success rate but when the chest x-ray was done in the prep stages, they found fluid there. i was in india so sweet tim had to go through this process solo, count his kitty breaths, and take him to his cat-free cabin for monitoring over thanksgiving. god bless.

after surgical extraction of fluids i had him see a kitty cardiologist to try to identify the cause of the fluid. a mass was found. i still didn’t think cancer and was like, “of course he has a mass in front of his kitty heart. i mean, it’s bonnard!” next stop was an internist in january who told me it was cancer. when he did the sonogram he said neither chemo nor surgery were an option because it was intertwined with organs. he said he’d go this year. my heart broke.

after an april emergency vet visit, we were told he was in hospice care. although i’ve slowly been preparing for this moment since his january diagnosis, i still wasn’t ready. over the past week he seemed to be declining rapidly and on thursday i contacted my holistic vet to make a saturday appointment. friday i baked all day with fellow baker kimberly in prep for a tranquil space teacher tea and secretly felt it was a sweet send-off for my baby who savored organic whipping creme during the process, followed us around constantly, and chose to spend time in the bathtub most of the party. some long-time teachers said their sweet goodbyes privately.

saturday i took louis to daycare and spent the day giving bonnard oodles of treats, hours of stroking, and lots of love. it was hard watching the clock and knowing that there were only so many hours left with him. she arrived shortly after 7:15pm. it was the hardest thing i’ve ever done. that evening among tears i purchased the perfect urn for him online and found rainbow bridge when googling “how to grieve pet loss” and “do cats go to heaven.” tonight there is a candlelighting ceremony tribute and moi, mama wilson, and beau will be joining for bonnard.

i’m sad he won’t be joining us in person on the tranquility tour this fall but he definitely will be in spirit. he seemed a fan of our vintage RV lillie {see him in passenger seat in upper left corner pic} and enjoyed car rides {except the one where tim got a new car and he crawled into the back seat to puke and poo on it}. despite this incident and many more, tim penned this sweet tribute over the weekend.

my heart is broken and although i know it will heal, the pain of loss is still so raw. speaking of gramma, when he was a kitten he came leaping across my living room and knocked gramma’s glasses off her head, leaving them dangling and disfigured. naturally, i showered her with his photos for years as a reminder of their tormented love.

ah, the stories could go on and on but i must get up and pretend to have some sense of normalcy today. thank you for indulging me and please send lots of love to his sweet spirit that can never be replaced. au revoir, baby bonnard. you were a true gift. bisous. x